In researching the curious I-85 Freeway Fire, I found that oppositions to the Midheaven of Atlanta’s incorp. chart occur during big fires in Atlanta’s history. Pluto in 1864 and Mars in 2017. Many thanks to Wikipedia, astro.com, and Marc Hereen Penfield’s esteemed “Horoscopes of the Western Hemusphere” with data and resources for this article. 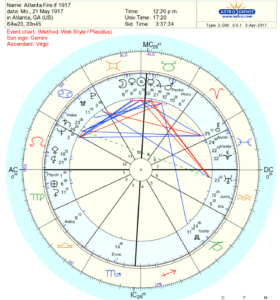 Here’s another one: The May 9, 1917 fire which occured within 2 months of 100 years before the I-85 fire. The 1917 firestorm was the worst since the city was set ablaze and burned to the ground in November, 1864. There had been several fires on May 21st in scattered locations in the morning which the fire department had responded to. But when yet another blaze flared up shortly after noon, no fire trucks with hoses responded for the crucial first twenty minutes. By that time, winds blowing briskly from south to north had spread the flames to adjacent buildings, and halfway up the block. There was no stopping the spread of the fire. The winds did not abate. The roof shingles of those days burned quickly and easily. After the fire, wood shingles were banned fron all Atlanta construction.

The flames advanced through several neighborhoods and were not snuffed out until eight hours had gone by. By that time, 300 acres and nearly 2,000 homes and businesses city had been destroyed.

Just like the 2017 fire, Mars was in opposition to Atlanta’s Midheaven and 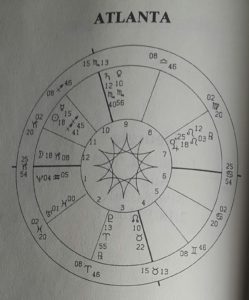 Saturn. A destructive fire exactly fits the definition of destruction of homes (Mars entering the 4th House, that of homes and families), visibly attacking the material status quo (Midheaven) of the city. One could well make a study of various disasters in various states and cities, to see how observations of Atlanta fires also apply in other areas. Instead of the two to three degrees between Saturn and Midheaven, other sensitive areas may take that same role. Areas without outstanding hazards, like Saturn at the Midheaven, may have much more peaceful histories.

The part of the city that burned included an area of “shanties and lean-to’s”, one of the poorest in the city. Saturn can indicate poverty, so the Mars oppositions coincidentally took down substandard (Saturn) housing, opening the path for better housing to follow. Mars-Saturn activates something that needs doing. In the freeway fire 100 years later, the city was alerted to the dangers of having huge stockpiles of combustible materials behind flimsy locjs and fences, underneath city structures. Undoubtedly better city planning will follow.