Working on a solar chart of Omar Mateen (Nov. 16, 1986), the shooter of more than 100 gay Orlando club-goers, I see his chart is so intense — SO angry, harsh, forceful and self justifying — that it shows Society would be well-served by recognizing and treating or at least watching such an uncommonly (potentially) dangerous person.

Let’s take a look at the astrological factors, one by one:

He was born a Scorpio with Mercury and also Venus in Scorpio. Mercury in Scorpio often makes a person secretive and determined. His Venus was within a degree of Pluto at birth. This tight conjunction commonly adds strongly to sexual intensity and desire, especially in Scorpio. Venus is corr.upted at an early age by dark Pluto. Bisexuslity might be one modus operendi of such an aspect. Love doesn’t need such intensity , and can devolve into jealousy, control games, and even violence. But if the rest of the chart was positive, Venus-Pluto might be just a footnote. 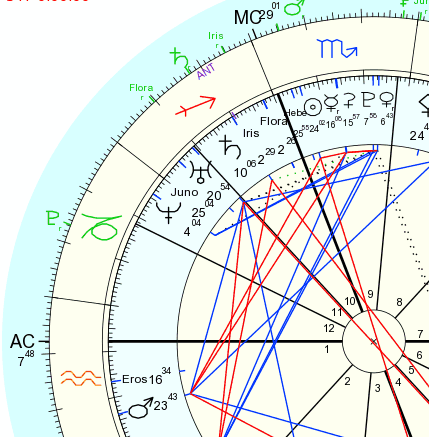 Sun and Mars are in a tight square.

Next we look at MARS as the planet of male energy, which was certainly very troubled in Omar’s life. Mars was in 23.43 deg. of Aquarius at his birth. Mars in Aquarius is said to often make a man an aggressive know-it-all.  As ‘astrophilosophy on tumbler’ says:

“They are extreme, aggressive know-it-alls who quite frequently develop God complexes. They believe they are the smartest, most intelligent, most knowledgeable people and everything should go according to the way they see it.”

There is the chance of scandal with this aspect, which Omar shares with Robert De Niro and Hugh Grant, aa both of them have been involved in sexual scandals previously and with Fyodor Dostoevsky who certainly wrote intently about evil and violence.

But Omar was born with this angry MARS  in a clash with SUN on one side, and the Moon on the other.  Sun in 24.02 SCORPIO is just 19 minutes of longitude from an exact square of Mars.  Omar’s square between Mars and Sun is VERY CLOSE, which makes its effects very powerful.  ‘Astromatrix” calls one with this aspect:  “The Discontented Seeker:”

“You can feel a restless energy seeking release, and this inner agitation linked to strong desires can lead to an uneven and eventful life, resulting from the effects of impulsive and sometimes ill-considered actions.”

The Solar Chart shows an approximate location of the Moon, but one we can work with. Set for 12 Noon, with Moon at 26 degrees of Taurus, the Moon could be up to about 5 degrees earlier or 5 degrees later… that is, from about 21 deg. Taurus to 1 degree Gemini.  At EITHER extreme, Moon WOULD be in within orb (8 or 9 degrees) of an aspect to both Sun and Mars,  opposed (180 deg.) to the Sun and square (90 deg.) to Mars.

According to Cafè Astrology the Moon square Mars is:

“…bound to get them worked up, and it’s not always clear what that something will be. Their bluntness can be .. considered offensive. They are eager to make a personal impact on those around them.”

At the age of 25 to 26, Sun progressed over his natal Uranus, a time of great instability and change.
If ONLY one of his employers, or the FBI had taken some account of the basics of his natal chart,  he might not have had the gun license, he might not have been a security guard anymore because he would have been let go from his previous position. His violent tendencies would have been confirmed through the astro-pattern.  What a shame that practically NO elements of society use this kind of forensic astrology to help determine a person’s true nature and risk potential.

For more on the patterned actions of the celestial forces, see my: