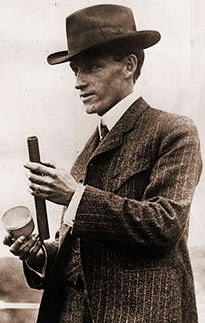 The most famous rainmaker of then all!

I created a chart for noted (and notorious) rainmaker Charles Hatfield, born in Ft. Smith, Missouri, July 15, 1875. I’ve found no record of what time of the day he was born so I cast a solar chart for 12 noon local time… typical when no time of birth is known.

(Thank to WHYY Philadelphia for the photo!)

Excerpting here and there, we read he was a sewing machine salesman who moved to California in 1880. By 1902 he had devised a mix of 23 chemicals which, he thought, could cause rain. He was paid on several occasions, in increasing amounts, for ‘making rain’ in the greater Los Angeles area, in increasing amounts, as his successes continued. An attempt up in the Yukon was a bust, however. He travelled as far as Honduras to make rain. After more than a decade of storm-invoking magic, he was hired by the San Diego City Council, on a kind of crazy ‘handshake deal’ which, during a severe drought in 1916, offered him $10,000 if he could fill empty Moreno Dam Reservoir. 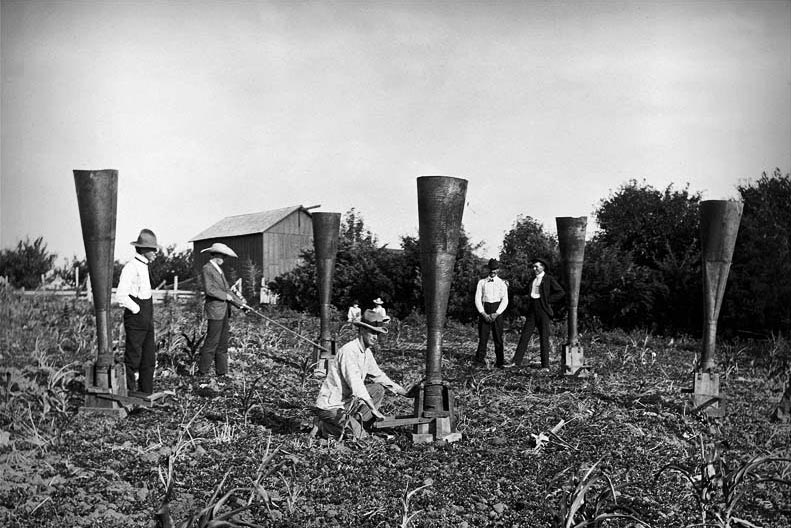 At first, I didn’t readily find a photo of Hatfield’s rain-making equipment, so heee’s something vaguely similar, used by a competitor named Melbourne in the Midwest.

But Hatfield’s is more impressive. Here is the 24 foot tower he built for the fatal Moreno Dam ‘working’

That is just one photo I found (below). There’s also a great article, but the images tell quite a story:

Hatfield set up his rainmaking equipment in that 24 foot tower he built next to Mareno Dam and put it to work. It worked surprisingly well… all TOO well.
Oh, my gosh! Wikipedia relates:

Although he had done the impossible, the City Council would not pay him his 10,000 dollars unless he was willing to accept responsibility for more than 3.5 million dollars in damage claims. He took San Diego to court, a number of times, persisting at it until courts in 1938 declared the flood had been an Act of God. So he wasn’t responsible for the damage, but he didn’t get any money.

There followed some decades of obscurity. his wife divorced him and he went back to selling sewing machines.

Quite late in life, in 1956 just a year and a half before his death, the movie “The Rainmaker” starring Burt Lancaster was released, it was vaguely based on someone’s idea of Hatfield’s life. Hatfield got a free ticket. We can only guess if he liked it, or if it hastened his demise.

Looking at Hatfield’s chart, one wonders: How Much Was There to his rainmaking theories and methods? (See Chart below, courtesy of the good people at astro.com)

I refuse to call Hatfield an outright fraud, based on his astrology chart. Look at the STRONG, hard-working MARS, in good aspect to Jupiter And Saturn. Someone had to build those 24-foot wooden towers, and he didn’t sit back and pay someone to do it. It was him and his brother, in the days before easier construction methods.

I just don’t sense that Hatfield was a “bad man”; although he dld have as “Achilles heel” which ultimately diminished his success and got him involved with the courts.

SUN is conjunct Asteroid VESTA; which is without demerits, and indicates a lot of ability to concentrate one’s mind and energies. Asteroid FLORA, which suggests blooming plants, was in a conjunction with expansive and benefic JUPITER in the beauty-loving Sign of Libra. Probably he had a love of nature and possibly also gardening so, of course rainfall and water were most important to him. Jupiter increases whatever it closely aspects. (If only Jupiter hadn’t been in an extravagant, bombastIc, over-expansive aspect to the SUN; maybe the future DISASTER could have been avoided!)

URANUS, the planet of novelty, surprises, disasters and even more so, of inventions, was conjunct CERES, The Grain Goddess. “Cereal” was named after her. This asteroid of the “Horn of Plenty”, often indicating the desire to help fill the cupboarda and granaries, in this case, through Hatfield’s very unconventional invention. were in this case, MUCH TOO MUCH. That’s how inventive, but sometines disastrous URANUS performs adjacent to the Grain Goddess. a bit like a conjunction of Jupiter with Saturn which poet William Butler Yeats versified as:

“If Jupiter and Saturn meet
What a crop of mummy wheat!”

(None too strangely, Hatfield also has a Jupiter-Saturn aspect… a protective trine. It enabled him to skirt around the danger of violence or imprisonment.)

He certainly has an over-expansive Jupiter, EXACTLY squared by the SUN, … in the 12 noon chart, down to just ONE MINUTE of longitude (60 Minutes in one degree), that IS really exact. such a shame we don’t know his exact time of birth. In astrology the closer the Planetary aspect, the more powerful it is and the more it is easily visible by others. This aspect indicates supreme self-confidence, but not always living up to one’s claims. Just because a person brims over with faith in themselves, righteousness, etc. doesn’t mean they’re right! Sun-square-Jupiter makes both followers and detractors, but in the end it almost always overestimates things and causes a stupendous Fall from Grace. Hatfield’s popularity was as evanescent as he himself was hopeful and boastful of winning that San Diego court case. But other things were “in the stars.”

Note Jupiter in opposition to CHIRON,the ‘Healer’. Ego versus selflessness. Another sign of IMBALANCE of FORCES! Neptune is not too far from an opposition to Jupiter as well. That gets awfully “called to a mission,” some of the idealism of which may turn out to be an overblown delusion.

Hatfield hovered between Paradise and the Inferno like an angel with singed wings. There is much to fear… but much to like in him. (If only he’d gone past the ninth grade!)

Hatfield’s MERCURY was in the watersign Cancer, (good memory and good imagination), and in conjunction with pleasant and entertaining Venus. Mercury coupled with Venus will often show that some favorite hobby is more important than one’s regular job. It does look like the chart of a Mercurial type, a potential good family man and father, with Venus there. No doubt as to his orientation, though I don’t read of his having any children. A positive self-promoter he initially attracted many supporters. After all, what he did seemed well-nigh magical. He was promoted up to a point… where were his friends by the 1930’s?

His legal cases must have cost him a fortune… another result of the ‘eventually squandering’ potential of the SUN-JUPITER square.

Those with hard, close Sun-Jupiter aspects move and keep moving. The positive Jupiter influence means “one gets to see the world.” The hard Sun-Jupiter brings unwanted departures and difficulty really EVER settling-down.

One reason for failure and long-term legal frustration, was the fact his MERCURY squared (90° harsh aspect) both the North and South Nodes of the Moon, also known as Rahu and Ketu, the Head and Tail of the Dragon. Afflicted by Mercury, it is a matter of bad luck based on bad timing. He swings contrary to the trends of the times… as well as the courts. It was a tenporary streak of good timng. But he was on the razor’a edge with the Nodes of the Moon, and badly compromised, tainted forever, in the San Diego disaster.

Thank You, and do get my ebook, “Planetary Combinations in Astrology Charts” on Kindle. It’s some 420 pages and only $6.95. Filled with 100’s of aspect analyses of celebrities and notables Best, —-Ed