Donald Trump “In the Stars!”

TRUMP and the OUTCOME OF THE REPUBLICAN PRESIDENTIAL NOMINATION 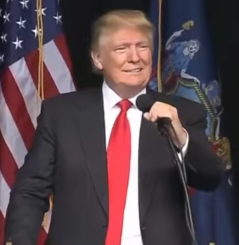 (1) MARS conjunct ASCENDANT in 26°47′ LEO.  There could not be a more vigorous masculine aspect than this, and it’s a focal point for Donald Trump and his Presidential chances in 2016.

In my Geographical Astrology work I recently found that a top lawyer likes to go up to an island off the coast of Alaska where he unwinds and attains more assured success than he does in a courtroom, mastering nature from a fishing boat. He does this, not realizing he is right under his Mars-Ascendant line. Nowhere else on the West Coast would he find this kind of excitement and joy.  His stated purpose is relaxation, but his goal is triumph, and amazingly enough, he finds it up there although it can sometimes be a struggle, depending on the weather, the people around him, and the transits of the day.  But all-in-all this is where he knows that although he may not be Top Dog all the time in the court room, he can be, out there in Alaskan waters near a certain cozy little Island.

Born with Mars Rising like this Trump is like that successful lawyer who is able to get a thrill from Mother Nature and from his fishing pole. But he doesn’t have to go to Alaska to do this, he can do this EVERY DAY because this was his birthright on account of being born with this vibrant, masculine aspect RISING.

Bold, brash, daring, a doer, a worker, egocentric, proud, self-confident, valiant, and an aggressive fighter and promoter… that’s what Mars Rising is like!

His Mars is just 3 degrees above his Ascendant. (Planets within 5 degrees are said to be Rising.)
The fact that his Mars is in the sign of Leo makes him love to be on the stage and under a spotlight. Stargazer Debbi Kempton-Smith once said;  “every face is a spotlight for Leo!”  There’s also something about the “mane of hair of the Lion” that’s important in making him the golden-haired boy.  Leo-Rising folk can be a proud lot!  And listen to that aninalistic growl in his voice!  A measure of glamour and vanity which is unsupportable by his critics definitely comes with this aspect.

Any good astrological reference book like the aspectarians of Sakoian & Acker or Pelletier, or a Google search “natal Mars conjunct Ascendant” will confirm my statements. 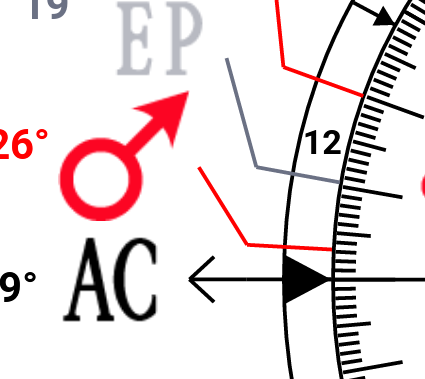 You will see a number of sites including Astromatrix, Cafè Astrology, DarkStar, and more… and the pages you read will SOUND LIKE THEY’RE PRECISELY DESCRIBING DONALD TRUMP!  Many of those texts were written long before Trump arrived on the scene. His astrology at his birth predicted that he would be the man you see today.

The astrological FACT of what Mars Rising indicates in a birth chart, was common knowledge to Royal Star-gazers 3,000 years ago. It is  bizarre that basic astrological concepts like this have stayed the property of the extremely wealthy and/or the very wise, or suppressed by religious or scientific ignorance, fright, or prejudice.

(2)  VENUS very close semi-sextile to MARS.  Sophisticated Venus mellows-out Trump’s rambunctuous Mars a little. (This closeness of an aspect makes it stonger than a more powerful aspect which is not nearly so close!) Venus finesses and adds charm!  Otherwise he would tend to be too blunt and arrogant  this is the aspect which helps him “make the deal”

(3)  MOON in 4th House trine MARS. Strong emotions. Energy expended upon family, home, and real estate.  A good 4th House loves the home and family, but it can also market property. Family (inheritance) helped energize him. He continues to work with and do business with sons Donald Jr. and Eric, and his daughter, Ivanka. 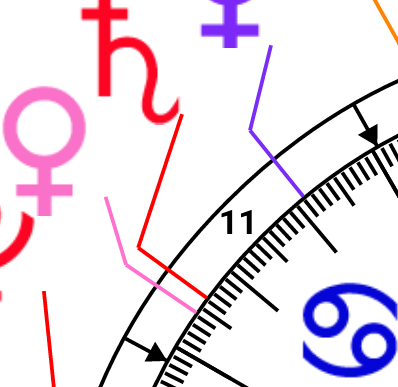 (5)  VENUS conjunct SATURN. Does not dissipate himself. He does not give his money away. He has long-term serious plans and can dedicate himself to a task.  A sign of being attracted to mature women, women’s that he can put in his business, and ask their opinion on things, not youth for youth’s sake.

(7)  JUPITER and NEPTUNE in 2nd House.  Strong desires and a powerful imagination (Neptune) impel him toward greatly expansive  financial success (Jupiter.)  Interestingly,  as researched in “Horoscopes of the Western Hemisphere”, by Marc H. Penfield, the MANHATTAN founding chart has these same planets of wealth and dreams in 22 degrees Libra, in an exact trine to Trump’s Sun up in his Midheaveen in 22 degrees Gemini and in the 4th House (family, home and real estate,) thus clearly linking Trump’s billions, and his success there with, to the world’s greatest City.

(8)  MERCURY semi-sextile PLUTO.
Mental attention (Mercury) is directed toward intrigues, secrets, mysteries, and sleuthing-out the truth & the whole truth, (Pluto in the 12th House.)  His “birther notion” and other odd-ball seeming, controversial views, emenate from this aspect, but the semisextile is a positive aspect, so it shows some of these intriguing mysteries turn out to be true.

(9)  MERCURY square NEPTUNE  Quite imaginative, dwells on fixed ideas as well as fantasies, and may have a hard time always distinguishing rumor from reality. This explains his great interest in Roger Stone, Bill Still, Alex Jones and other so-called “conspiracy theorists.”  Trump does not keep things bottled up secretly, he talks about and writes about much of this research, openly.

(10)  SUN-URANUS-NORTH NODE conjunct in 10th House in Gemini. Manifests past good karma (North Node, and has a great opportunity to do something visible to all In this very lifetime, but he may definitely  be perceived to be an “outsider” because he “vibes” as so non-traditional, independent and so iconoclastic, that stodgy and slower “Saturnian” types are uncertain or even afraid of him, the same way that people who used to sell buggy whips were terrified of the first automobiles. Many people will tend to see the irregular, rebellious, quirky side of him, rather than the inventive humanitarian (Uranus as New Age ‘Aquarian’-trigger) and problem-solver. But it is clear that many are seeing him as a timely (N.Node) answer to their prayers (Sun-Ura highest elevated planets.)

(11)  MOON in 4th House, opposition SUN-URA-N.NODE. Balance is needed between the yin-yang of Sun and Moon. He moves back and forth between his public life and his private, family life. A factor that might hurt him at some point in his life is the attention that of course he pays in his love for family home. There could be a dichotomy or a conflict at some point between job and family.

(12) JUPITER square SATURN. His financial high points, his billionaire status, wrestle against the threat of loss and bankruptcy, as has happened several times in his life. The issue is that Jupiter can be overconfident and at times over- expansive.  Saturn embodies the very opposite properties of Jupiter.  It lacks all confidence and it turns to depression and loss. So part of Trumps life and energy are devoted to striking a balance between these two opposite factors. This friction between the positive and negative sides of life,  lead him to the discovery of what’s behind the so-called “business cycle”.  He inevitably gets both sharper, and also somewhat more cautious, than he was 20 or 30 years ago.

As planet Uranus, ruler of the masses in revolt, entered the sign of Aries, the ‘Arab Spring’ suddenly began and the old rulers and old ways of doing things were taken down, for good or bad, through sudden change.  Uranus is in Trump’s natal midheaven together with his Sun.  This is why he visibly appears to be so radical compared to others in his party.

Transiting Uranus, which has now driven much deeper (20 degrees and 50 minutes) into Aries,  forms a strong positive trine (120°) to Trump’s Mars. It is CLOSING-IN on the EXACT ASPECT.  And Trump just gets more successful as this astronomical process continues.  It also forms a creative and success-generating sextile (60°) to Trump’s natal Sun, the most vigorous and success-generating planets in his chart.  Mars and Sun are linked right now by transiting Uranus.  This is a once-in-a-lifetime factor because of the slow speed of the transit involved.  A positive Uranus-to-Mars connection means a job to be done.

Uranus continues, going closer and closer to the exact trine of Trump’s Mars Rising up until July 30th when it will be in 24 degrees and 30 minutes. This covers the entire  period of the Republican Convention.

If you look at:

…you’ll see the planetary energy which will serve Donald Trump between now and the Republican Convention, and beyond.

On July 30,  the planet appears to retrograde in the heavens slowly at first and then gathering speed, On November 5th, it will be in 21 38 Aries. Although some other factors will have arisen, it will still be in a powerful trine aspect to Trump’s natal Sun and approaching the exact trine to his North Lunar Node,  that very karmic Point mentioned earlier.

In early 2017 it will turn direct again and go over all these positive points in Trump’s chart again… and this time it will keep going, having done its work.

Among other things, enormous energy (Mars) is thrown throughout this period at the electronic media (Uranus).  We will keep seeing him on the screen!

Trump swims very well in this olympic-sized pool.  Trump calls the shots. Trump does better than expected.  His “star is at the zenith.” Trump certainly gets the nomination, and very possibly, the general election.   ——e. a.