GF tries to burn his house; Man left to fend for his 13 cats.

It can’t be a good day when,  in the snowy depths of January, on the slope of  a West Virginia mountain,  a disgruntled girlfriend, suitcase at her feet,  tries to burn down a man’s house as a kind of parting salute, thus scattering a herd of 13 terrifed cats into the snowy drifts.  You know there are deep issues going on between the two when she tries to vaporize some tender years of togetherness by using arson.  She must’ve been seeing red.  And we already know — she was no cat-lover!

This sounds like a thriller about some madwoman, but truth is stranger than fiction, and this really happened to an Internet pal, Jim Mosser.  His Comparison Chart, which I did for him and this unusual lady,  is one of the worst that I’ve ever seen…    It says they may become enemies, and that’s exactly what happened.  They tried to live together  “24/7” in the woods, but that’s a no-no if you’re with someone whose chart looks like an incoming tsunami.

He calls a place he’s named Spirit Mountain his home, where for a number of years he’s been enjoying living in the country and tending his herd of derelict and orphaned house-cats.   He didn’t start out as a cat-lover, but things change when kittens and cats appear meowing at the door.  A remote, country location is often a magnet for those who have one litter too many, or are moving or breaking-up and want nothing more than deposit a cat or two (or ten!) on somebody’s doorstep, somebody who might feed and take care of them.   Well do I remember that’s what happened when my family lived in an orchard home, half-a-mile from the closest neighbor;  one day we suddenly had seven cats that hadn’t been there the day before.  That’s what happens when you live in the country. Jim’s empathy was stretched as more cats appeared, but he did what he could to help,  from the first cat to the last. There have been more than twenty over the years, but nature (hawks, owls, and passing vehicles, and this past year, what HE calls, the “monster of the woods”,) eventually caught-up with some of the herd.  But the herd remains, because new members appear at the door, meowing, nearly as often as some of the other ones vanish.

I have a photo which Jim sent which shows a few of these cats. You can see that they are enjoying a nice, soft bed!  I’ve heard of a “three dog night”, s0 this appears to be a feline equivalent — a  “six cat snooze!

some of Jim’s cat ‘herd’  in a quiet moment: 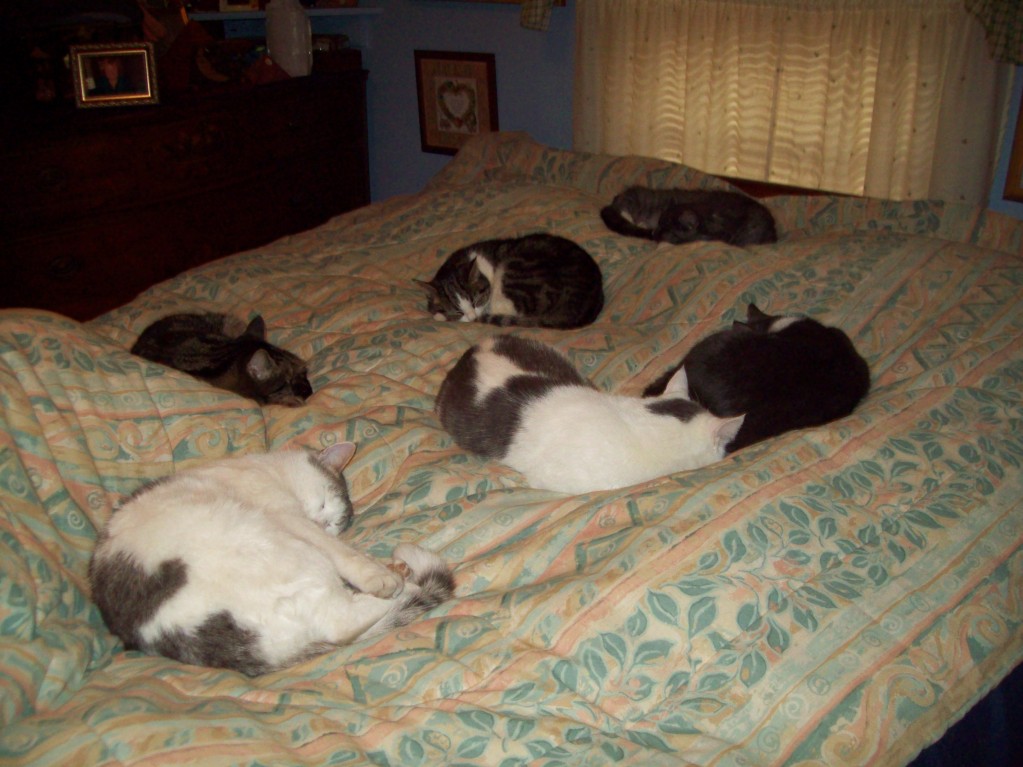 Jim had a kind of hermitage or retreat going for awhile.  His place was very mellow, remote, and enjoyed by all.  He’d love to get back into the swing of things again,  but he’s been distressed at the fact a lumber company clear-cut an adjacent property a few weeks ago,  evidently going over the line onto his property and taking some of his trees, too. A legal battle is looming over that.  But nothing, short of thirty or forty years of forest growth, can bring back the tranquil views and sounds of nature which the lumber men destroyed.

No matter what…  Jim needs to not feel so gloomy about things.  He is concerned about the clear-cutting,  because the quiet woods he enjoys so much and wants to share with others, is threatened. His woods are still okay, but they end very abruptly on one side.  And, as if that isn’t enough,  he’s worried that his rather over-excitable ex-girlfriend may show up again, this time with a blowtorch or couple of gallons of gasoline.   He’s been taking good care of the cats,  but they go through quite a bit of  feed and a couple of cans of cat-food  every day.

I have a theory that there is someone who is going to read this Blog who not only has the personality of an angel, but who really likes cats and would love to help Jim  out by sending a few cans of catfood down there to West Virginia!

Jim sent me the following, a list of his cat’s names —  and more!

Michael– most recent from the woods.  Can’t really pick favorites they all have their place and personalities.
Lost in the last year to the monster of the woods:
Sammy, Snowball, Larry, Smokey, Rumi and Peanut.  Peter died of some illness untreated due to my not realizing he was sick till he holed up in the closet and died the next morning.

They eat 4 cans a day, and a coffee bucket worth of dry food, which is an eighth of a 16 or 18 pound sack.Thus I go through some 1,460 cans per year and 52 plus sacks of dry. Neuters cost between 95 and 140 with rabies shots, which they all are behind on presently. Those are like 20-25 each, Vet doesn’t give mass discounts either, but the rates are fair as we are a rural area, big city costs far more.

I asked Jim for his mailing address, and he kindly sent it to me,  knowing I’d pass it on to any Friends of Felines that may be  ‘out there’, so here it is: