Anyone born with Venus and Mercury in a close conjunction has a good chance of having a smooth delivery of words and ideas from a creative, versatile mind. Writing and speaking can gain popularity. Unfortunately there are some speed bumps on the Marco Rubio ‘roller-coaster’ to success, because this aspect is strongly modified by another, from Mars. Mars can add energy but it can also be a wrecking ball. 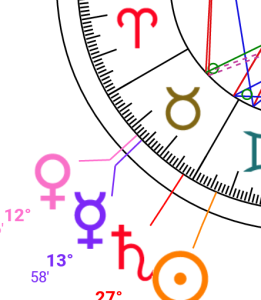 In Marco’s case, the conjunction takes place in the sign of Taurus, and Taurus is a soft, take-it-easy kind of sign for these planets. It is tempting to say he doesn’t care for rough work or long hours. When I heard that Marco had not been appearing in the Senate as often as he should, and had missed more votes than any of his colleagues, it didn’t surprise me, considering the lack of a strong dedication and ability to abide tedium which the Taurus Venus and Mercury combo predicts. 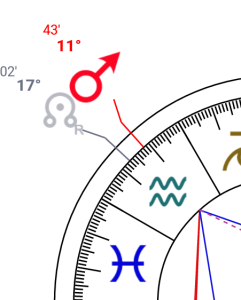 “Mars Attacks!” <—Not the Movie

Marco’s Mars is in Aquarius, which is often comes out in an inflexible ‘sure-of-his-own- opinions’, and unwilling to adapt to those of others mentality. His Mars is in a harsh 90-degree square to Mercury-Venus. Mars square Mercury makes for a contentuous and argumentative spirit and takes away most of the gentle tranquility of the Taurus Mercury-Venus. Debate and argument are second nature, but the square means the energies are badly aligned and therefore clash.

On the other hand, Mars also links up to planet Uranus, but in a much more positive aspect — a trine (120 degrees.) Work (Mars) can be innovative and original, and even inspired (Uranus.) Use of all technical and modern and scientific equipment is favored; this is seen as an aspect that can range from an ability to fix electronic equipment, to inventing a new product, to being on radio and television.

Mars in good aspect to Uranus adds some electricity to the personality, as well. He can score points with his charisma. But sooner or later those bad Mars aspects to other planets will cancel out the charisma.
Recent events confirm that his charming nature suddenly comes under a shadow. Marco gets overwhelmed; at least once during the debates, we have seen him have a meltdown, going into some kind of trance-like state or temporary mental disorder, where he semi-consciously fell into parrot-like repetitions of memorized speaking-point modules. In the later debates, the world forgot how charming he can be, when he made personal, vitriolic attacks against Donald Trump.

There is a flaw as to how he uses his energy and communications; his timing may be off in some surprising ways. His relations with women may not be the smoothest, because Mars and Venus, the love and sex indicators, are badly aligned. He looks handsome from a distance, at least, to members of both sexes.

So despite the initial smoothness of the Mercury-Venus, the influence of Mars makes it hard for him to reach his interpersonal goals.

The work indicator Mars which also has to do with the male qualities, is taken to some idealistic, experimental and at times unrealistic ends with the Uranus combination.

Mars working so well with planet Uranus means he may prefer games and electronic media, and other addictive attractions, to Interactive relationships. Phone and Internet connections may be favored.

One thing that Marco has is a great nearly fanatical belief in causes and beliefs. This is caused by Jupiter being only 34′ (half a degree), away from an exact conjunction with Neptune. They are together in the first degree of Sagittarius, which is the sign which expensive and optimistic Jupiter rules. This often comes out as either politics and religion, or both. Rubio is a great believer. He can envision fantastic things for himself, especially. The odd thing about this combination is that it doesn’t say the beliefs in either the politics or religion are correct or realistic, they may actually be over-inflated, (Jupiter,) and very much over the top from more realistic beliefs that most other people hold (Neptune.) These beliefs do exist and are very powerful within the individual, giving a tremendous vision of himself, spurring him on to various attainments. Certainly Marco Rubio is inspired and driven by his conservative beliefs, but the presence of Neptune means that he may take them a bit too far. They are not strictly realistic. He may not always have the most practical dreams in the world but they excel in their desire and intensity. But there are powerful malefic natal aspects challenging Jupiter and Neptune. 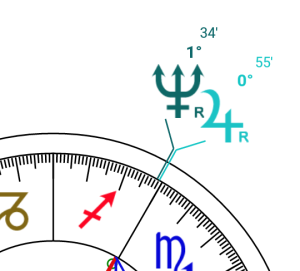 I have no doubt that there’s a tremendous desire to do good and to help people when Jupiter and Neptune are combined in this way, but that is not to say that there is an obvious clear path to obtaining one’s goal. Neptune can be a corrupting influence. It can cause distorted beliefs and obsessions, or a lack of a clear focus, and an inability to keep one’s feet on the ground. Many men who have Jupiter-Neptune as well as Mercury-Venus combined, have an easy-going, suave, yet compulsive and overoptimistic edge. What pushes Marco relentlessly forward to excel in life is the harsh aspect from Mars to Venus-Mercury, and the oppositions to his Jupiter-Neptune (clarified below.)

Marco does not always come across as an alpha male, and this is a strange thing indeed because who else other than an alpha male would be running for President? But often that soft Venus in Taurus comes through, he looks like the easiest push-over on stage, any alpha qualities flee, and we can understand that there will be much attraction to Marco throughout life for his softer, more feminine qualities of good looks, smooth sounding voice, and his sensuality and exoticism. He must vibe as ambiguously sexed at parties and private occasions.

The Defeat of the Much-Wanted Goal

But now here is what I feel is a killer in Marco Rubio’s chart: the Jupiter-Neptune that has an idealistic side, but also an obsessive attraction to religion and politics, is challenged very strongly by an opposition by both Saturn and the Sun. This is one of his most important balance points. But balance in this area is very difficult, these forces are SO opposed, they could be self-destructive.

We could have started this whole analysis with this combination: Sun- Saturn. These are his origins, these are the roots. “Salt of the earth”. He did not come from a hugely successful family, but it was a very strong family that had the urge to survive by immigrating from Cuba to the United States. A demanding, harsh reality (Sun-Saturn), poses great challenges to the attainment of his dreams and idealistic, if somewhat exaggerated or deluded (Jupiter-Neptune) visions. His visions and ambitions take him away from those roots. Perhaps Jupiter and Neptune form the lucky stars that he wants to latch onto to rise above the place (Sun-Saturn) he came from.

Sun Saturn together can be hugely pessimistic, and Jupiter and Neptune paired-up can be the exact opposite. So one of the challenges he faces may be a kind of mania at one time, and depression at another.

But it can also represent an important figure, almost always an older mentor or relative or teacher; most probably one’s father or grandfather or professor, or employer, (Saturn,) who may both spur but then deny or challenge the dreams and illusions Such an influence may also scoff and slow the realization of the best qualities of the Jupiter-Neptune. It is as if he is pushed toward great achievement, yet restrained and humbled by the demands of powerful male figures in his life. Success along the line of one’s dreams might be cut short somehow by this kind of configuration, because the Sun and Saturn pull the shooting star of his highest ambitions (Jupiter-Neptune) back down to earth again.

Another way of looking at it is that humble and earthly roots (Sun-Saturn) vie with the great aspirations and dreams of God and Politics. Is there a way to really balance them? Or will they confound each other? One great authority figure such as his father or grandfather, put into motion Marco’s great aspirations but many years later, another, bigger alpha male authority figure, Donald Trump, may have ended them.

(Our Thanks to Astrotheme for its HUGE database of celebrity charts, portions of which we have used above!) 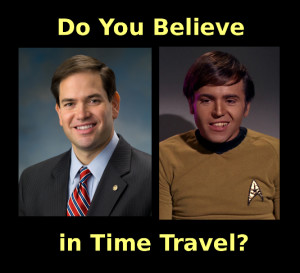