by Ed Augusts and Nikki Ligtelyn 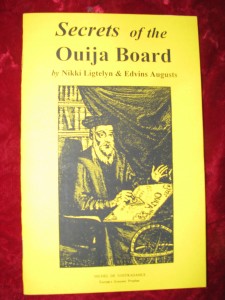 Originally Published in Paperback by

The need for a good, basic book on the subject of The Ouija Board existed 14 years ago, there just wasn’t very much on the market that delved into the subject of the Ouija.  So my California partner Nikki Ligtelyn and I delicately, respectfully examined both the facts-of-the-matter as well as a legends that have grown up about not just the Parker Brothers’ famous oracle, but other, earlier talking boards going back more than 100 years.  Because the Ouija has antecedents that go back to the dawn of recorded history.  When our primitive ancestors, perhaps 20,000 or 30,000 years ago, gazed into the comforting flames of ther crude hearths or firepits in caveman days, and fancied that they saw images in the flames, or in the smoke that wafted up above the fire, they were in the first stage of being oracles.  Soon, the most gifted among them, would perform wizardry because the things they saw in the smoke or flames would have relevance.  Psychic powers were always part of the human race, but they often need some object or “prop” that would make them come out.   Whom among us hasn’t stood at the edge of a wishing well and gazed at the Moon’s reflection to make a wish — and thought they saw something either flit across the waters or rise like a dream beyond the waters?   They are looking into another dimension, and since there are entities with minds and bodies in our dimension — what makes us so shallow as to think there wouldn’t be entities with minds and bodies in that other dimension, as well?   So, as people became more aware of their mediumistic talents in the 19th Century, and as the United States and Europe brimmed over with spiritism and Spiritualism, the door was opened to table-rapping, wall-tapping, and ectoplasmic conjuration.  And out of that 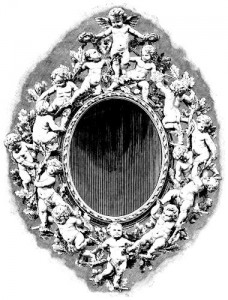 came so much of the Crystal Ball gazing and Scrying Mirror sessions in which people tried to mesmerize themselves, open-themselves-up to images and messages from ‘Beyond’.  It was a slightly different twist on this desire, a brilliant attempt to get hard-and-fast NUMBERS, LETTERS and WORDS from the ‘Great Beyond’ rather than merely subjective impressions, that led to the Spirit Boards. It was the DESIRE for SCIENCE that impelled the Spirit Boards forward… the desire to be able to see a RECORD of one letter-after-another, in these Spirit Messages.   and mysticism, rose the Spirit Boards of the 1890’s.  In our research we saw 3 or 4 different Spirit Boards, rivals among themselves for the huge business that was waiting to be made from a legion of Americans and Europeans, who felt freed by science from the supersititions of their old religions, and liberated from stale old Church Rituals, prayer, penance, and Mass, to investigate the Spirit World on their own!  So let it not be thought that attempts  at Spirit Communication rose out of a total vaccuum.  No, they emerged in those places and at those times when human beings were finally FREE of old restraints to more or less sicnetifically investigate Spirit Phenomena for themselves.  Thus came the many Spirit Boards,  and highly placed among them, unbeatable and remarkable among them, came our very own Ouija Board.

Many people have no idea that Ouija follows in a tradition of trance channeling and Spirit Writing — also known as Automatic Writing. Some examples are given. Did you know the noted Irish author W.B.Yeats’ wife dictated the mystical “The Vision” to her husband through automaticwriting, or that Patience Worth wrote a number of novels while performing automatic writing, including some lovely unearthly poetry that sounds as if a Spirit with the finest senses had dictated it?   This text was about 64 pages in the original softcover, but the E-Book version removes some frilly decorations and pictures, taking it down to 36 pages of text.

Nikki and I are still avidly collecting first-hand OUIJA stories for future editions of this popular book,  so if you have any true OUIJA or Spirit Communication tales to tell  — please contact us! —–Ed

By the way — that’s the 16th Century prophet Nostradamus on the cover of our hard-to-find 1997 paperback edition, but in his lifetime, it is safe to say Nostradamus never used a Ouija board, although the minds of the clever and ingenious have been tinkering with Spirit Communication for not hundreds, but many thousands of years.   He may not have used a Spirit Board in his lifetime.  But for all we know, he’s ‘coming through’ on Talking Boards like the Ouija today!