Travels in California & The Cosmos 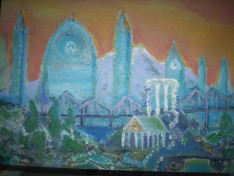 Here is Ed Augusts’ love affair with the Pacific Coast, including a portion of the Southwest where he’s lately been hangin’ out.  Not since Paul Theroux got aboard a railroad train or Lewis & Clark went up the Missouri has a travelogue resulted that examines the intimate lives as well as the scenic wonders like this book does for California and the West. The scenic treats include Mount Shasta, Shelter Cove, Mendocino and Ft. Bragg, San Francisco & various places in the Greater Bay Area,  Santa Cruz and Monterey Bay, and then veering south into a no-man’s land of ruinous, searing deserts and neon playgrounds (like  Las Vegas). among other places of interest. This book is, strangely, not only unfinished, but it is also being finished on practically a day-by-day basis as Ed adds more and more to it from his warehouse of memories.  One thing of possible interest is that in almost every city and county there are romantic or sexual memories.  Ed’s reached a time in his life when he feels he has nothing to lose by “calling a spade a spade”, letting his hair down, taking off the kid gloves, etc. etc., as he is doing now in other very recent (2011) works.   You want a romantic, sexual, provocative travelogue of California and the West?  You’ve got it right here in this book.  But, guess what?   Ed doesn’t stop his travels at the California State

line or at the edge of the Pacific Ocean, he continues on some wider journeys, both inward, and outward,  and makes a kind of cosmic journey out of this adventure.  Maybe not an epic, not the Ramayana, not War and Peace, but not a frothy tale of one or two fast, meaningless sessions of sex in some Watsonville house of  ill repute or a Bakersfield backyard, either.  But the main thing to remember is,  you will look into the mind of an evolving creature with a creative brain.  the creature and his creation will continue evolving over the coming months.  Some chapters will be added, and possibly some will be taken out, so you can get early editions and later editions.  The travels aren’t over,  maybe they’ve just begun — and there is no way to see everything.  So this book will continue to morph and grow ,  as you will when you read it…  with added excitementt and new adventures.    (Best not to be shared with any youngsters, though!)

AVAILABLE AS A KINDLE E-BOOK and CHANGE SPACE QUALITY
PAPERBACK in FEBRUARY, 2013.

(Painting above is by the author)