Sins of Yanukovych and Salvation of the Ukraine

TURMOIL IN THE HEARTLAND

After months of political and social upheaval, news comes out of Ukraine that its Russian-leaning President Yanukovych has fled Kiev, the Capital, leaving the reform-minded Legislature in charge. The police and other local authorities have gone over to the rebels.  He fled from his Imperial Villa at night, leaving no-one behind but a zoo full of animals — that I hope someone is taking good care of!

There is almost no difference between a natal chart, and the forces that influence it, that is to say: the transiting planets, and a mundane or political chart, based upon an important date in history for a country, city, or other entity. The Ukraine is all about revolution and reform because its 1991 Declaration of Independence chart features planet Uranus, indicator of reform and revolution, Rising, thus coloring the whole chart with a tendency to reinvent itself every decade or so. 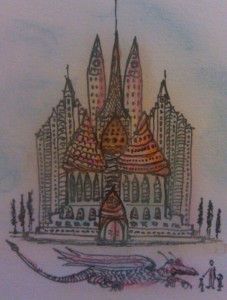 Parts of Old Kiev remind me of my colorful old architectural fantasies.

The square to the Moon was very significant as Moon is the common man and woman and  their standard of living, and their success or failure The Astrology of the times is clear: The oppressive forces and a President aligned much too closely with the powerful coercive influence of Russia, show up as a transiting Saturn influence, going through the Midheaven of the Republic of the Ukraine's national astrology chart (based on the Ukraine's declaration of independence chart in 1991.) This chart affects Ukraine today; the earlier independence chart of 1918 is no longer valid since the break-up with Russia 23 years ago.It was also made valueless by many decades of Ukraine's incorporation within the Soviet Union.

Gloomy old Saturn was identified with communism and socialism 100 and more years ago. The levelling of society, the destruction of religion, poverty and starvation as seen in the harsh land reforms, pogroms and general oppression, are all readily linked with Saturn.

Therefore, It should be no surprise that Saturn had gotten up into the very Midheaven of the mundane chart of the Ukraine Republic during the past few months, or that from that powerful position, Saturn was squaring Ukraine's mundane Moon in Aquarius on one side, and closing in on squaring its Jupiter, Mercury and Venus.

The square to the Moon was very significant as Moon is the common man and woman and their standard of living, and their success or failure.  The recent uprising, which has the earmarks of a popular revolution, is the "push back" by the man and woman in the streets, who wish to become more aligned with the West, rather than go back to their former oppressors,  the Russians.

It is also no surprise that as the oppressive square is now just PASSED, the President of the Ukraine has fled out of Kiev, and may decide to leave the country altogether, for his own safety.  (I'm intuiting that, I haven't actually heard it said!)
When the aspect by Saturn was the closest to the Moon is when many feared the reformers were losing, and that Ukraine would sink into a linked, dependent relationship with Russia, like it had before Independence in 1991.
Now, quite suddenly the situation has totally changed. "Saturn's forces", have been at least temporarily defeated.

SINS OF GREAT WEALTH AND POWER.

It is always instructive to see how people live when they have tremendous power.  It turns out that Yanukovych had a mansion 16 miles outside Kiev that was an incredible showplace of luxury and comfort, with his own animal menagerie.  THAT is NOT Saturn, that is Pluto — as in "Plutocrat!"  In its first day of liberation (or rather abandonment, because 40 helicopter loads of "stuff" and people were taken out suddenly),  the first "liberators" took Yanukovych's golf clubs and went out for a leisurely round of golf on Yanukovych's own golf course. A wonderful break in the tension!

Yanukovych was born on July 9, 1950, with Mars and Neptune Rising. in Libra.  He obviously had some quirky, romantic, and unusual interests. He liked the stage, he liked Hollywood.  He did not spare himself luxuries and pleasures.  So it was natural that when Uranus, the planet which likes to turn everything topsy-turvy moved to EXACTLY oppose his Mars-Neptune, that the whole "house of cards" rapidly fell apart.  At the same time,  to oppose his Midheaven.  Midheaven is one's station in life, one's career.  How one is seen by others.  With Pluto in the 4th, deeply critical, powerful, and subversive elements squared off against him. ,The combination of these two outer planet GIANTS working against him at the same time,was too much for him, and his "house of cards" collapsed. He was not necessarily punished for his crimes or his passions… its just that time goes by… things change!  Planetary motion indicates how and when.

A good Tarot card for this situation is the "Wheel of Fortune",  what goes up — must come down!   But vice versa is also true.

Is trouble over for the Ukraine? No, certainly not!  There still a high level of danger.  Although Saturn has passed the Moon, it is turning retrograde and will go over the Moon position again. And it hasn't finished squaring Jupiter. Mercury or Venus yet!  Not by a long shot!  We seem to be in a lull between storms… or maybe just the eye of the storm!

Now that the Winter Olympics are ending in Sochi, Putin will feel obliged to make some kind of gesture, or perhaps a show of force, so as not to lose face in the region.
More to come!  —–Ed

I invite you to visit my new COSMIC SOUL DATE site to either get a comparison of charts for compatibility, OR, to see if we can match-you-up with a SOUL MATE / SOUL DATE.  Try:  http://www.cosmicsouldates.com

Those of you who haven't had a session of either cards or astrology with me since February 2013, or earlier, will receive a DEEP DISCOUNT for your next Reading if you book it before March 1, 2014.  You don't have to actually HAVE the reading by March 1st, Just make the appointment for later in the month if you like!