Ted Cruz “in the Stars”

Ted Cruz could be described as venal, as Venus & Mars are together in the 2nd House ($$), which suggests he LOVES any good source of revenue. He loves making money. Financial matters are a cornerstone of his life.  (Consider his Goldman-Sachs connection, through his wife, and also through the fact Goldman gave him up virtually undisclosed million-dollar contribution in 2012!) 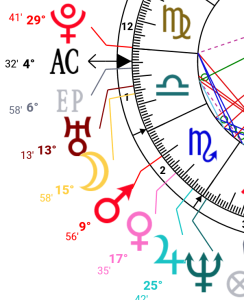 But Jupiter is also nearby, and in a conjunction with Neptune, and those two planets suggest strong religious and philosophical beliefs, with elements of a child-like belief in the supernatural, and, indeed a literal belief in the Bible:

“You are a natural born mystic; your spiritual life is of great importance to you. Your path to success involves following your intuitions and never losing touch with your dreams and ideals. You could have a highly successful career in music, spirituality, glamour, illusion or fantasy. Writing can be an excellent path for expression of your special kind of awareness. Whimsy, fantasy, magic and mysticism are areas where your imagination and perception are especially focused and vivid. You are probably very tuned in to your dreams, and may often be guided by them.”  —members.wizzards

But as part of the 2nd House, the Jupiter+Neptune suggests religion, and dreams, take a security-conscious financial direction. Ideals are likely used to attain wealth, and  money will come from religion,  which is exactly what’s happening, as his fellow evangelical religious believers donate millions for his campaign.

In fact, he WILL combine Jupiter-Neptune-quality dreamy ideals based on with actual profitability.  Like selling shares of a Church, or making a holy ambition out of financial matters and reforms.. he combines those two worlds. 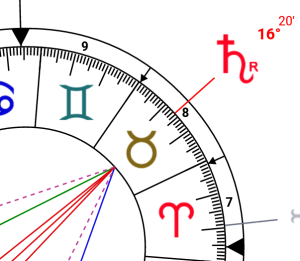 Venus, however, is closely opposed by Saturn. All the money doesn’t really buy him any happiness. Much of it disappears. He feels needy. But he applies caution and control to pleasure in his life. He may never have had the pleasures others take for granted. If he is married, his wife takes the money, so he always needs more, as he does NOT feel secure financially.

All this 2nd House activity is in tenacious Scorpio, which doesn’t readily give out information. His finances are private. I don’t see necessarily dirty financial connections, but they are possible. He could prostitute principle to pesos., because the second house matrix of money is stronger than the individual items in the house. Therefore, I just don’t see actual benevolent principles, religious ones, here. It’s all about the scarcity (Saturn) of security (Venus in 2nd House), in Ted Cruz.  He needs more sweetness in his life, but he can endure loneliness and privation to get it.  Especially if he’s got a good fantasy going, as might be provided by extravagant religious beliefs.

The Venus-opposition-Saturn is perilous when it comes to achieving actual happiness and wealth, though, and enjoying such achievements. There will always be a strange feeling of scarcity   Like, life just isn’t sweet enough:

“…With this aspect, you will always be challenged by competitors until you realize how important you really are. You must stop underestimating your selfworth… Stop hiding the truth from yourself. Perhaps when you were very young, you were led to believe that you were less talented than others in every way, and you still act on that belief. You need competition to prove how capable you are; if you reject competition, you will never truly know your capabilities. Throughout your life, you will have to make concessions to others without knowing whether or not they are worth the effort. In time, however, you will be able to judge people without having to endure the painful experience of submission. As your judgment becomes sharper, you will become very skilled in solving problems for yourself and others. You may suffer emotional frustrations during the early years, but as you become more mature you will understand that no-one gets everything when he or she wants it. You may compensate for privations that you experience in your personal life by becoming successful in your profession. Don’t anticipate an early marriage unless you are prepared to make enormous concessions to keep it together. Better to postpone a binding partnership until you can be more selective in choosing a mate. If you marry for security it may last, but it will be little more than a corporate merger with little emotional satisfaction.”  —Astromatrix

Venus and Mars are together. Mars adds robustness and aggressiveness  Wow!  He would be good at those “beg-athons”, putting forth appeals for money!

Cruz also has Mars opposition Saturn. I’ve seen this often coincides with enemies who hold back, or attack,  the things one is doing or saying.  I believe having such enemies is often justified by the things such a person does, as this aspect is corrosive or corrupting of one’s character, and we saw an example of this on the very night of the Iowa Caucus, when Cruz stole votes from Ben Carson by his staffers spreading the story that Carson was dropping out of the race.  Doing that kind of thing does not exactly make friends!

He has another dimension visible:  Mr  Cruz has Moon conjunct Uranus, which are RISING in his chart;  and one can’t keep Rising planets secret. They are OBVIOUS. So let’s see what they bring to the table:   It means his emotions (Moon)  are out of the ordinary;  possibly vastly changeable, and quirky (Uranus).  His mother herself (Moon) was quirky and changeable, paradoxical, born in one country, falling in love with a citizen from another country and moving to a third country to have her child – – Ted.  In line with the fact that one can’t cover up or ignore the planets that are rising in a chart is the fact that his mother’s actions have come back now to haunt Ted as there was some question about his eligibility to be President — because of his mother’s travels and the specific father that she chose for her child. And the country where she had him, Canada!

He does not FEEL like other men. He is not a settled man,  by this account, as far as who and what he likes and loves. He is full of surprises, not that that’s always a good thing! The public (Moon) doesn’t much care for him because he has an “outsider” quality (Uranus), too independent and unknowable to be really loved. The whole “birther issue” seems part of this Moon-Uranus conjunction
He will inevitably turn away the masses with this aspect.  I don’t see how it is possible that he would be elected President of the United States, in the end;  he would just lack enough support. There just would not be quite enough friends and fans. Moreover, people with sense his lack of emotional balance which may come out sometime or another during the 2016 presidential campaign.

To add / clarify just a little bit more about this, Astromatrix says:

“Moon-Uranus aspects indicate possible personality conflict based in the clash between established behaviour patterns (symbolized by the Moon) and the progressive but disruptive energy of Uranus. While this conflict can spread throughout the psyche, the Moon’s affinity is to feelings and emotions, and Uranus’s is toward impersonality, abstraction, and intellect. This can create duality and friction between ‘head and heart’, which may be difficult to resolve. Emotionally, you may experience regular mood changes and erratic, contradictory feelings, appearing to others as unpredictable, unreliable, impulsive, or lacking in commitment and responsibility. Lunar energies fluctuate, ebb and flow; and joining these with Uranus is not conducive to a stable and controllable inner life.”

Finally, Mercury is the planet of the mind and of communication  His Mercury is in 13 degrees Capricorn, in the House of home and family. His Mercury is in a harmonious trine  with Saturn. Mature older people like him and give him support therefore he appeals to Baptist ministers and their flocks, and other evangelicals. But mercury is also in a square with planet Uranus which rises in his chart, and this is a contradictory and difficult energy which brings lots of disruption with it. These are the two major aspects which is mercury makes in his chart it almost causes a causes him to be torn in two directions the traditional, and the totally radical.  Can a person be both?  Can a person emerge from out of traditional religion and become a fiery force for radical change?  Perhaps that’s what Ted Cruz is doing right now.  But there’s a certain instability in but there’s a certain instability in Mercury square Uranus, which makes great and permanent accomplishments, based on what he says, seem unlikely to be achieved:

“Preferring to be self-directed, you don’t always take advice easily. There is a part of you that loves to shock, challenge, and instigate with the things you say; however, this may not be a conscious process. Your mental energy and output is extremely variable–one day you might be capable of enormous effort and interest in a project, and the next day the opposite…
At times you can be very dogmatic. You have a tendency to be, or to appear to be, scatterbrained. Your attention span can be short, and as a result, you might often leave projects unfinished.  At times you can have an irritable temper and need to channel some of your nervous energy into constructive pursuits. Take time to reflect on what you truly believe in, because many times you are too busy challenging established thought, or playing devil’s advocate, to get in touch with your own opinions and feelings. This way, your intelligence, integrity, and ingenuity can come shining through.”  — Cafè Astrology

Yes, but will Ted’s intelligence and integrity come shining through, or will he get hung-up at some point in his dogmatic beliefs and irritable temper?