Planetary ‘Transit System’ Can Get One Killed!

Beautiful Hollywood actress Jean Spangler has been missing for 65 years. What can be said astrologically that might throw some LIGHT on the case?

The Jean Spangler story is rather complex, fascinating in every detail, and definitely suited for being turned into a 2-hour movie, but for the lack of any kind of ENDING. The story clamors for a Hollywood ‘wrap’, not 65 years of silence.

26 yr old ambitious dancer/budding actress, banging on the doors of Tinseltown success. But success hasn’t come yet she has a 5 year old daughter by a broken up marriage and lives with her and her mother and sister-in-law. Has alimony payment problem with her ‘ex’, and says she is going out to see him, and then filming a scene for a movie. Kisses her baby goodbye. Leaves At 8pm. Never comes home. Her strap-broken purse found at the entrance to Griffith Park 2 days later. Strange note inside addressed to ‘Kirk’, about meeting ‘Dr.’ so-and-so, but note ended in a comma, as if she’d met Kirk or been attacked or otherwise interrupted. Kirk Douglas and her had recently filmed a movie, and he was aware of her existence, but never got together with her. He had a good alibi. “Ex” in dispute with Spangler had new bride give him an alibi.

Everybody had an alibi.

She was also seeing a thuggish hit man-type who worked with The Mob. Our starlet got around, but it didn’t do anything good for her longevity.

Her girlfriends at work told police she was 3 months pregnant. AHA! That explained the doctor! Every doctor by that name was interviewed. But the L.A. police were stumped as all the leads ground down to nothing. No body was ever found — the case is still opem!

(Googling “Jean Spangler Wikipedia” will give you more details!)

Planets in GREEN (See chart below!) were transiting those locations at the time of Spangler’s disappearance. Inside the circle are her planets at birth.

SATURN had just transited Mars, Venus and Sun. As many of you know from personal experience Saturn going over a cluster of your inner planets creates drastic, unpleasant situations. Look for events of previous months, which had a forced or unpleasant nature. Whomever she was Seeing 3 or 4 months earlier was oppressive and DANGEROUS, as she could have been killed months before. She could certainly have made an enemy at that time. NOW Saturn had just moved on, but the destruction it caused was still in effect.

Where was JUPITER, the protective “Greater Benefic”? In 22 degrees Capricorn, far, far away from shedding any benevolence, send rescuers, or give ‘second chances’ to Jean Spangler at that time.

About 7–10 days before her she disappeared, benefic VENUS transited JUPITER. She may have made, or come into some money at that time. A friend helped; a door briefly opened. She thought everything was going to be alright. But Venus PASSED Jupiter, the beneficial influence was waning down to nothing by October 7th, in fact, all the stress was coming back. That’s why she felt she HAD to act, even if it meant trusting people that no one in their right mind would have trusted.

Mars AND Pluto exactly transit her natal Neptune. **This is the true cause of her death.** Mars and Pluto CAN BE harsh, malefic forces and ten tines more destructive when tightly conjunct as they go over her delicate Neptune. This is ABSOLUTELY an attack, with fatal severity possible.

Neptune is almost always “the MYSTERY”, in this case the mystery of a disappearance, and it is easy to see what happened to her. TWO MEN, (it could also be two ‘forces’), one a gangster-type (Pluto) the other, (Mars), more of a thug or just an angry guy, (could have been her ex husband or an ex boyfriend), lured and fooled, confused or restrained her (NEPTUNE). Neptune could be chloroform, exhaust gas, meds or drugs liquor, or overly-imaginative perversion or paraphilia.

The weak point they took advantage of was certainly her tremendous anxiety over an unwanted pregnancy., and thus they maneuvered her wherever they wanted her to go. But perhaps it was not doubly-sinister, rape and murder. It MSY “just” be the abortion. She COULD have gone thru a BOTCHED abortion and bled out and/or died within 24 to 48 hours. The HARSH TRANSITS over medically-sensitive Neptune, which typically bring unforeseen complications clearly indicate this was a TERRIBLE DAY to have an invasive, ultra-risky procedure.

But only an Astrologer could have warned her of that!

SOMEONE gave her a place to have the procedure, and then efficiently — since she was never found — disposed of the body afterwards.

I can’t imagine her running off to Mexico, etc., as some theorized, abandoning both her career and a 5 year old daughter, and her mother, as well. The transiting Mars and Pluto do not speak RUNNING AWAY, they bespeak VIOLENCE to her person.

No, I think she expired within 48 hours of her disappearance.  Here is the relevant portion of the chart, courtesy of astro dot com: : 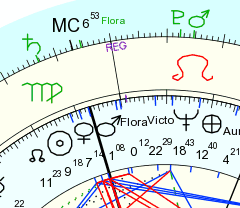 Transits over Natal on day of disappearance

Solar birthchart shows Venus conjunct Sun. She was likeable, likely popular, and pretty. Goddess VENUS energy felt like her TRUE SELF (Sun). Exudes the warmth (Sun) that made people desire to be around her.

Venus conjunct Mars She had a passion for life, trained (Virgo) in music and dance, but she liked to get things right. I don’t know if she was scholarly in any way in school, but she certainly would have studied and read well. In Virgo, her career would have been of utmost concern.

Sun conjunct Venus and Mars in Virgo. A glorious passionate and ambitous streak. Healthy. Very careful about how she looked. Identified (Sun) with herself in several roles: glamour girl, on-stage willing worker, lover. CHOOSY about lovers, due to perfectionistic Virgo nature, although this is partly thrown off… probably made worse… by an Airy Moon Square.

Moon square Mars, Venus and Sun. Moon appears to have been near 1 degree Gemini at birth, though the time of day was uncertain. Critical aspect injecting anger, hardship, difficulties with marriage and children. Likely a smoker, as Moon square Mars lights up something, even if it’s just a temper. Not quite so likely a drinker. Taste for a wide range of emotional situations. Rough experiences with men generally. Passionate quarrels can lead to trouble.

Moon in Gemini is seldom satisfied for long, and could have more than one thing going on, both in friendships and sexuality. She could be attracted by one man, and then become just as active with his friend or brother.

Sun and Venus opposition asteroid HYGIEA, SUN almost exactly so.. Medical problem or as likely, a doctor or someone in the role of a doctor could interact very badly with her. Her female (Venus) qualities were most at risk; but also, this ‘surgical’ influence opposed her very Lifeforce (Sun).

I get the feeling that she could have had an abortion, but it went badly, that is why it appears as an attack in her transits… and she died within a few days and her body was disposed of.

Her Saturn at birth was just 5 minutes if longitude — one 12th of a degree –from IRIS (aka Iris 7), theb7th asteroid to be discovered. The meaning of IRIS is associated with the iridescence of a RAINBOW, but it’s deeper tgan that;;?: In mythology, Iris scooped-up water from the River Styx, the river the newly dead must cross, and brought it to courts of justice on Olympus when god/desses were charged with crimes. Although no exact similar example exists in the astrological literature, SATURN is an extremely negative force to have right up against Asteroid Iris, as Saturn has been linked with hardship, illness, and death. I can only see this 5′ conjunction in a fatalistic or karmic light. Here we get to the perpetually troublesome question of why some people are victimized and meet such a bad end; without there seeming to be any reason for it, while others enjoy all the best that life has to offer. Why? We might as well call it: “remorseless fate.” But perhaps we CREATED our blessings or punishments in a former lifetime. That certainly reassures Buddhists and Hindus that we live in a ‘just’ system

Jupiter trine Pluto: She was comfortable with ‘big shots’. Was not intimidated by powerful men — though perhaps she should have been. Lulled or gulled by tales of fame and fortune.

* The chart is quite interesting. I will add to this as I do more research Thank You! —e a.