Donald Trump: Out of It? Or Play-Acting?

I don’t blame Donald Trump  (b. June 14th, 1946, at 9:51 a.m. in Queens, N.Y.), for bowing-out of the race for President this morning.  Common knowledge is the commentary that accompanied the press release:  His poll numbers were going down, and the viewers of his reality show were becoming perplexed, since people love to stereotype and think of a guy in a familiar ‘box’ …as a certain kind of  person… And they hate it when somebody shows a ‘new side’ or leaves an accustomed role in life to become something new.  Any Obama fans who also liked “The Apprentice” must have scratched their heads at the thought of Trump running against THEIR man next year.

Worse than that, however, when we look on this on the cosmic scale… just about EVERYTHING’s been happening in ARIES and TAURUS this past month, and Trump has NO planets, Moon or Sun in either of those two Signs. It must have seemed to him like he was missing the plane, or being ignored, and if there’s anything Trump hates, it is feeling other people are taking attention away from him.

Trump’s Uranus is his most-elevated planet, in conjunction with the North Node (also known as the Dragon’s Head) and his SUN. The Uranus–N.Node–SUN conjunction near the top of his chart makes him quirky, unpredictable, at heart, a somewhat selfish and self-centered person who has such a unique way of thinking and behaving that he leaves most other people behind him in the dust. And he is also timely, which is to say:  he takes the measure of his opposition and makes best use of it.  He goes ALONG with TRENDS in an almost psychic way.   The American people may not understand him, but he is in tune with the American people.

Trump absolutely LOVES to “dish it out”.  Just watch him FIRING people, on-the-air! He is a showman on the order of P.T. Barnum who also loves controversy.  His 12th House, the house of secrets, means that he likes to find-out other people’s secrets, and this led to him getting on the “Birther” bandwagon recently.   He can dish it out — but can he take it? Because the 12th House full of planets means plenty of secrets ABOUT HIM, TOO  (See below!)

I believe it was not the half-assed “thinking about running for President” that was strategic, but it is this withdrawal from wanting to run for President that is strategic, and merely a petulant little ploy.   A few months from now, more planets will be entering signs in which Trump has his most energetic planets and aspects. This tells me he will either personally reconsider, or he WILL BE DRAFTED BY THE MEMBERS OF THE REPUBLICAN CONVENTION when no candidate even half as exciting makes an appearance.  Do you think someone with the ego of Donald Trump would allow a person like Sarah Palin, for example, to go down in history as a Presidential nominee, and not him?  You have another ‘think’ coming!

Donald Trump has a very interesting chart! His Jupiter, the planet of wealth and success, was in 17 degrees, 27 minutes of Libra when he was born, and this is in conjunction with New York City’s own Jupiter (and Neptune) in 22.27 and 22.39 Libra.  His father had very ably amassed a HUGE local real estate empire, mostly consisting of apartment towers, which the young Donald took-over management of.  His nimble mind, represented by Mercury is 8.47 Cancer, which is in exact conjunction to N.Y.C.’s Mars, the work and energy planet planet, in 8.22 Cancer. A Mars-Mercury conjunction ALWAYS brings out an argument or a fight, however.  He was bound to disagree, tooth-and-claw with various city politicians and land-use practices, and the like. His work in New York City has not been without arguments, battles, divorce, and frustration. At least once, he has gone broke and just barely tottered back from disaster.

His MARS, the planet of the male (and work, energy, and battle), is 26.46 Leo, squaring New York’s Sun and Venus in 25 and 27 degrees Taurus, respectively, showing friends, both male (Sun) and female (Venus) turn on him and oppose him in his home city.  Contention and aggression are everywhere!

The Jupiter-to-Jupiter conjunction has kept him lucky enough to always make a comeback, the the Big Apple’s Neptune helps make him charismatic and scintillating, the object of public focus who, in his mid-60’s still has the appearance and male energy of a man 20 years younger.

Will this be enough to ever make him PRESIDENT of the UNITED STATES, though?  His Mars is in a close opposition to America’s Moon, (I’m looking at the July 4th 1776, 2:20 p.m. chart),  showing he is not sensitive enough to the standards and needs of American women and mothers.  Moon is the sensitive side. His Mars fails on that score. He has issues.  Recent criticism for use of the “F” word reiterates this factor.

His Moon in 20 Sagittarius closely opposes his Sun in 22 Gemini. There is a wacky, unbalanced side to Donald Trump. His mother and father gave him different messages. He didn’t know which to choose.  He’s had problems in relationships ever since.  Some people with a close Sun–Moon opposition become masters of balance.  His Jupiter in Libra helps. But others are — shall we say — a little impulsive! 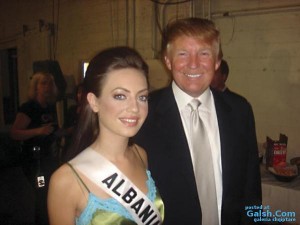 His VENUS and SATURN are in conjunction in his 12th House, the house of secrets, mysteries, and “self-undoing”.  An old matter, an old love story of some kind involving cruelty or disregard, is a skeleton in his closet which is likely to come out if he gets to the point of being vetted as a serious candidate.  I don’t think his past can stand much scrutiny. “Self-undoing” means, in his case, that he has been hurt badly in his love life.  To some extent, Saturn’s cold and icy nature has controlled and corrupted the soft and loving Venus side, which makes him seem like such an old goat.  His Venus being with Saturn shows has favored women who are too sophisticated, too powerful.. they end up being rivals instead of lovers. Well, if he has taken himself permanently out of contention, then he has undone himself, indeed!  Surely someone with a chart so conflicted with both the New York City and the America chart, has as much contention and strife and bad blood in the past, as he has hope and promise for the future.  Of course he will drop out of the running, to see what the public reaction is…  and then take a deep breath… look in the mirror to see how good he looks… and then come right back out again, into the spotlight and the applause.  I KNOW he’ll be back!