Great Secrets of the Tarot!

Fans and clients,  as well as readers who are just passing through and came upon these words by sheer happenstance, are encouraged to order my new “Great Secrets of the Tarot” which I am adding the finishing touches to right now…  It is an e-book which will yield forth a crop of suggestions, methods, old and new, and secrets related to the philosophy, history, and imagery of the Tarot.   I focus mainly on the Waite-Rider, (also known as the Rider-Waite and the Rider-Waite-Smith, after its illustrator),  but I am philosophically and cosmologically in agreement with the fact that different Readers as well as Clients have different ideas and visions and while the Marseilles Tarot or the Tarot of the Bohemians works for some, perhaps the New Orleans Voodoo Tarot or Grand Lenormand may work better for others.  I will not begrudge them total independence in this matter.  I encourage experimentation with Tarot…  I certainly did, when I devised my 235-card deck back in 1984.

.
What are my credentials to write about Tarot?  I was introduced to Tarot by two female Tarot readers who were living in the same apartment building I was, on Nob Hill in San Francisco, in the “Summer of Love”, 1967.  They lived and breathed Tarot and I was a frequent visitor.  They were mystical and they were cute!  I fell in love with the exotic imagery and I quickly got my own deck and began experimenting.   It was the following spring that I did Tarot readings at a festival near Tower Hall on the San Jose State campus.  I retained a fascination for Tarot through several other careers, and returned to the cards in the mid-1980’s in the first of several occult shops / book stores that I owned and operated.   This book is a follow-up, of sorts, to “Secrets of the Ouija” which I and Nikki Ligtelyn wrote and published at Mystic Books in California in 1997.  I would suppose I have done 5,000 Tarot card readings, so the images, in all their exotic splendor, look like old friends now.  Over the years one gets familiar enough with the cards to come up with new ideas, new lay-outs and new perceived correspondences.

In this book I draw upon the knowledge and wisdom of people like Eliphas Levi,  Aleister Crowley,  S. L. MacGregor Mathers,  Hajo Banzhaf, Paul Foster Case, and others such as my mystical and helpful California friends, Nikki Ligtelyn and Cheryl Petrovich.   But in much of the discussion on imagery, allusions, astrology, etc., I have evolved my own ideas.  I think the astrological correspondences of the Higher Arcana are fascinating and a subject for much discussion.   I see the experts have quibbled about many of the factors that connect Tarot with Astrology.   In most of this, I take the side of the Hermetic Order of the Golden Dawn and its teachings on the matter, as exposed to the public by Aleister Crowley in the first decade of the 20th Century, and as further developed by Paul Foster Case and others.  The only place I really quibble  about the Golden Dawn theory, is that they ascribe three of the Higher Arcana to the elements Fire , Water and Air,  but fail to include Earth….  I feel you either include all four elements –– five, if you include Spirit or Akasha as one of them — or you include none.  The elements are too important to pick and choose one or two and ignore the others!  Therefore I have removed the attribution of the Fool, the Hanged Man, etc.,  from the elements and have attributed them to astrological factors instead.  Fortunately, removing the three elements means I can add Uranus, Neptune and Pluto — three planets which were neglected by the Golden Dawn…. especially Pluto, since it wouldn’t be discovered for another 30 years!  What’s remarkable is that these three planets fill the gap in the Order of the Tarot cards, planets which were not attributed amongst the cards for the entire 20th Century. 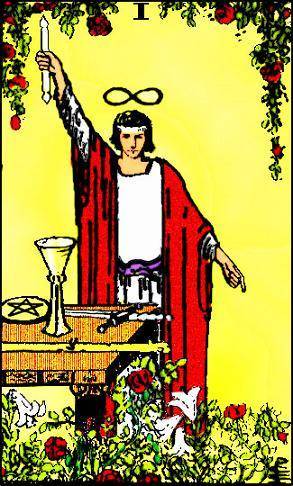 This is great fun to write, but also a challenge of my mental abilities to organize the material.   I hope I am doing a good job on the subject, and I hope that my special reading methods, such as my 78-card method and my Astrological Tarot method, become more popularized.  If you want to receive a copy of “Great Secrets of the Tarot” when it first “hits the stands”, (so to speak!),  or if you just wish to exchange some ideas with me,  let me know, please, by sending me an e-mail to:  Ed@edaugusts.com

I’ve decided to PUBLISH THIS BOOK as a Kindle E-BOOK and soon after that, as a CHANGE SPACE quality SOFTCOVER.  Watch for Further Details!   Thank You!