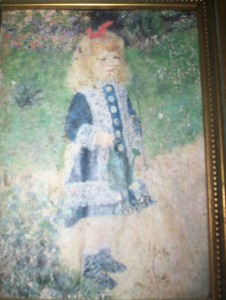 Some people can see it, some can’t.  Several people have seen “THE FACE” staring out of the little miniature of “A Girl With a Watering Can”, by Pierre-Auguste Renoir, from across the room. It gave CHILLS to one lady, even while her husband just couldn’t see it at all! Just below I will give you the secret of seeing the Secret Face in this painting!

The original was painted in 1876. The print had been damaged on account of a rainstorm, it was a throw-away item, until I rescued it.  Because it had been out in the rain,  it has uneven surfaces and tiny specks and ridges that the original does not have. The owner threw it in for free with a bunch of other pictures and books that were in better shape.

One day I happened to view this framed print from about 10 feet away, and instead of seeing the little girl with a watering can, I saw part of a man’s face looking at me, as if through a tear in in the dimension of space between my world and his!   It looks a bit like one of our ‘Founding Fathers’, the chiselled nose is reminiscent of Thomas Jefferson, especially as he’s been shown lately on some of the five-cent nickels in recent years.  But it could just as easily have been George Washington, looking a bit severe, a bit unhappy with his view of life from “the other side”.

But, maybe what I’m seeing has more of a mystical side than does textbook American history;  it could be one of the Saints, or some other figure of a man that wants to make himself be seen.  In my wildest imagination, I am thinking — maybe this could be a Spirit Guide or an Angel? I may THINK that I’m observing him, but maybe he is observing me!

Okay, I KNOW it is just an illusion. There are some dark areas which, if you let your mind try to re-organize the space to SEE a human face — the human face is there!   There was an item on NPR, I believe, about the mind naturally wanting to make random objects like boulders on Mars or the Moon look like something familiar and human. That’s why we try to see a “Man in the Moon”,  which I have never really seen, although obviously some others have.  But although I can’t say I really have ever been able to see the “Man in the Moon”, I do see the Man’s Face coming out of Renoir’s Little Girl With a

YOU CAN’T SEE IT, CAN YOU?  Okay, try this!  View the little ole thing sitting on the chair, here… see it?  Now!  Where you see the blonde-haired head of the little girl?  Imagine for just a second that THAT’S A FOREHEAD.  Now, you will see the slice of the man’s face, just below!   Now, you SEE it!  Thank God, I thought I was going nuts.

Does it mean anything? Did Renoir paint this painting of a girl yet suggest a second, secret subject matter? That’s highly doubtful, although a tour of Renoir’s known paintings may reveal some surprises, but none, I think as startling as this one.  There ARE paintings like that, however, which hide some secrets, and there are, also,  HAUNTED paintings. Although you mostly see these on old series like “Night Gallery” and “Twilight Zone”,  I think the one I painted of my family home is one, because the figures in the windows seem to change slightly from one viewing to the next.  (See below!)

If you want to see either of these “haunted” paintings, you are most welcome to view them — they’re here at my place on E. Grant Road! ——-Ed 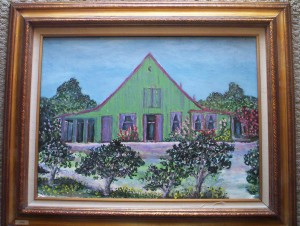 You've probably seen this painting before!