Moon and Planets are ACTIVE! 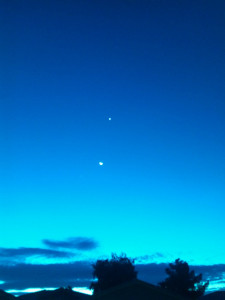 Implications for Putin and Obama

BEAUTIFUL conjunction (alignment) of Moon and Planets in Virgo this morning… By the time we took this picture, at dawn, only Moon, Jupiter, and Venus could be seen. (Click to zoom.)

A number of things have happened or will soon happen:  MOON left Venus behind 15 or 16 hours ago, and opposed Neptune in the heavens just 3 or 4 hours ago.  Moon is about to “pass” Mars within the hour, and then, 6 hours later, Jupiter!  Very busy day for the Moon!  It’s conjunctions with Venus and Jupiter, and the conjunction of Venus with Jupiter, which will occur in the next 12 to 14 days, as Venus progresses thru Virgo, are all quite positive, especially for anyone with planets or luminaries (Sun or Moon) in that immediate area or linked to it positively by aspect.

The Moon is like the “second” hand on a clock, it tends to set-off events indicated by the slower-moving planets.

The bigger picture is framed by what the slower-moving Planets are doing:  Here we see Mars opposed Neptune just a few days ago, a sign of some kinds of confusion, danger and misplaced idealism, as the Red Planet, linked since ancient times with war and battle, ‘opposed’ (was influenced badly by) the planet of murky, at times devious, mysterious and nebulous, confusing energies, (Neptune), as we could see in the “tears and sobs in the cloakroom” during the House Speaker debate, more campus and student shootings  in several places in the country (even this morning, at Northern Arizona University),  and in Russia’s forceful, badly-timed and probably wrongheaded or outright malicious, actions in Syria.

Mars is now approaching Jupiter,  which is a happier, easier phenomenon than when it opposed Neptune a few days ago!

A time of much activity ahead, but of a Virgo (careful and practical) nature…  The murky and devious Neptune influence is now past.

Maybe the Russians WILL bomb ISIS out of existence, and some good new ground rules for everyone’s safety (Virgo) will be put in place. Great chance to attempt to work at modifying laws and regulations in the United States!

Mercury which is in Libra right now, is the Ruler of the sign Virgo. Mercury has been slowing to the point where it’s going from retrograde to direct again. This change actually happens later today. This ends a (typically three week) period of Mercury in retrograde.  During the time when Mercury is retrograde, many decisions and agreements and new beginnings, are found to be flawed and have to be reshaped, redrawn, or simply fail or dissolve.  So the Russian incursion, if you will, into Syria, to support President Assad, came at a very bad astrological moment, and probably will not work out exactly as they planned.  The Russians certainly are working at the task of bolstering Assad quite assiduously and carefully, as befits all these Virgo planets and also the Mercury retrograde rulership bombing everything in sight. Putin is a serious guy, even though he’s got a big chip on his shoulder.  To see how his Syrian campaign is going to work for Putin, one only has to compare all this Virgo and Pisces activity, to Putin’s natal chart.

Vladimir Putin is likely going to fall from power as Saturn approaches closer and closer to his natal Mars over the next one and a half to two years.  But meanwhile, all these planets in Virgo are in Putin’s 10th house of how he is seen in the world and of his “occupation”, so he is it a kind of zenith right now.  But the oddity is that he has no planets in Virgo at all, so in some way this is a deaf note, a very grey moment.  it lacks real fulfillment. It is not really any kind of victory for either him or Russia.  Neptune is going through his fourth house the house of home he has to watch out for enemies very close to hand… in the Kremlin!

Pres. Obama has two difficult planets in Virgo:  Pluto and Mars.  It is Pluto in 6.59 Virgo which has been activated over the past months by a very slow opposition by Neptune… people fooling him or perhaps self-deception because of wishful thinking… and the current Mars and Moon transit. Mars is in the nature of a personal attack and sort of caps-off the Neptune opposition. Obama is feeling personally attacked. He feels thwarted, fooled… practically humiliated. Look for big changes in how he deals with the stressful situation of world politics today and over the next few days. He simply MUST respond with more than rhetoric, unless he’s willing to “take it laying down ,” as they say.