Most Prolific Author of All Time!

He was the author of most of the Bobbsey Twins, Tom Swift, and Hardy Boys books….and the ones he didn’t write, he farmed out to others.  And you’re no doubt familiar with the Nancy Drew series by Carolyn Keene? Well, there was no such person as Carolyn Keene. Only… Edward Stratemeyer!
This prolific author was too clever and cunning, perhaps, for his own good.  His success was tremendous, but it has a hollow-sounding ring, proven by the fact that despite all his efforts writing and publishing, his name is practically unknown on the book scene. 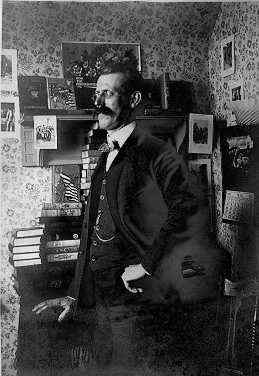 1 out of 100? Probably less than that, would recognize his name.  I would say it’s more likely one out of a thousand, which hardly seems fair when you consider his accomplishments.
As a Star Gazer I’ve got to ask: what factors account for near- anonymity, despite all this work? Because Stratheneyer is hardly a household name.
Born October 4, 1862 in Elizabeth, N J., Edward, who was an extremely dedicated and talented worker (Venus conjunct Saturn in Virgo ~~ in which Saturn and Virgo each connote hard (Saturn) work (Virgo), and lasting, worthwhile (Saturn) items of artistic merit (Venus), but a practical and utilitarian, perhaps ‘compact’ nature (Venus conjunct Saturn), invented the modern day children’s book series, when he discovered that a series of books that he wrote under the same pen name,  would sell much better than something he wrote under his real name.

Thus evolved series such as: The Bobbsey Twins (1906) and Tom Swift, and decades later, The Hardy Boys (1920’s) and Nancy Drew (1930). He as prolific, and the planetary aspect which shows this ability is Sun in conjunction with Jupiter, in which the planet of all that is large and great and expansive, teams-up with the Sun in being one of his most noticeable aspects.
But Venus (The pleasures of Fame) is linked with Saturn (cold obscurity, delayed notice), making him nearly an “the Invisible Man.”  But Saturn also TRIES HARDER,  and his was in Virgo, a sign associated with books.

In all, Stratemeyer wrote some 1,300 books, yes that’s right THIRTEEN HUNDRED,  two to three times as many as written by those writers usually thought of as the most prolific authors in the world:  Georges Simenon and Agatha Christie.  The other titles which he commissioned push the total to close to 3,000.
He overcame writing and publishing problems inventively, and that’s clearly indicated with his natal Mercury conjunction with Pallas Athena, an obscure but very favorablr aspect about which astrologer Bob Marks wrote:
” The harmonious aspects (conjunction, sextile, or trine) are excellent for solving problems and communicating the solutions so that they will be accepted. This is an excellent position for anyone who has to work with words for a living (I have the sextile myself). ”  Therefore it is not surprising that Stratemeyer set up a system where assistants and contracted writers fleshed-out and finished books based on his outlines.
Edward Stratemeyer passed away in 1930, when he was only 66 or 67 years old. This is indicated in his chart, for Jupiter and Sun are attacked natally by an opposition from Mars, which can literally cause attacks, but also fevers and inflammations. Mars opposite Sun can indicate accidents, but Mars and Jupiter in a harsh aspect like this often indicate financial accidents and mistakes.
So my feeling is that he lost a lot of money in the big stock market crash in the first year of the Great Depression, and it’s because of that same Mars, that his health was not all that great at this time either. Despite all his hard work and efforts over decades of writing, I do not get the feeling of a huge amount of wealth in the last few years of his life.
Despite all his success in publishing, Venus conjunction Saturn does not make for personal fame, or even popularity.  Venus’ creativity and popularity are put before the workaholic altar of Saturn.  Did he have children?  Was he ever married? The answer is practically:  “Nobody knows!”
Thus Carolyn Keene, who never even existed, has 100 times as much “name recognition” as that obscure writer and publisher, whose name is so strangely, easily forgotten:  Edward Stratemeyer.